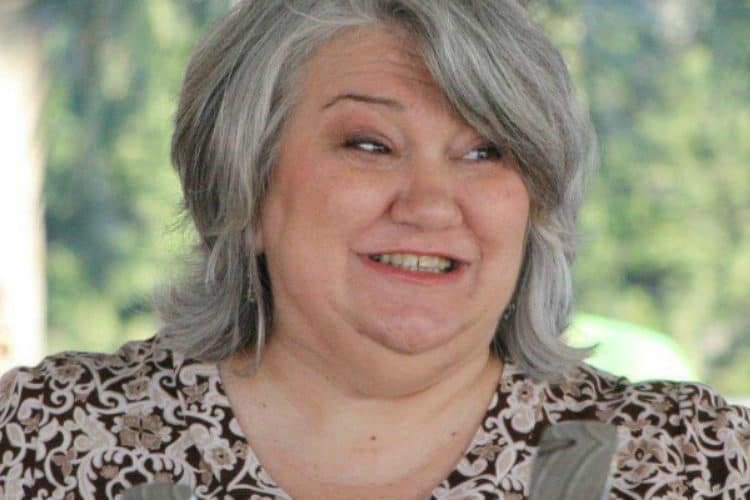 We recently received an email from Teresa:

I started going gray in my mid-teens just as many of my mother’s family have done.

Since I am a musician it was an easy thing to cover for many years; my hair has been everything from close to my natural brown/black to purple, burgundy, auburn, etc. l was fearless with a bottle of color, and no one was ever surprised when I turned up with a new color as it was just a part of who I was. That changed in my early thirties. Due to an unfortunate slip in the shower, I managed to break my right shoulder blade and tear my rotator cuff, which meant surgery and several months of my arm in a sling.

By that time I was coloring/covering every two to three weeks due to my extremely fast growing hair (a great thing when you’re growing out but NOT when you’re coloring!). The night before surgery I persuaded my hairdresser to buzz cut my hair to just slightly longer than a Marine’s. She wouldn’t even do it at her shop but made me come to her house—yes she’s a friend, but that was way beyond. Three weeks later, still sporting a sling, I returned to work with a great punk style gelled into standing on end, and an incredible salt and pepper color.

Almost every female I knew said they wished they had the nerve to do the same, while the reaction from males was much more varied not only due to the color, or lack of, but the cut.

Cut to today twenty years later; I am now the proud owner of hair that is halfway down my back and is primarily silver-white around my face and the rest is salt and pepper.

I do look every bit of my fifty-three years—unless you spot one of the four tats I have acquired since turning fifty! I get numerous compliments on both the hair and the tats. I think it has more to do with being comfortable in your skin than anything else.

So for all my sisters in gray, and for those of you considering it, rock that silver!