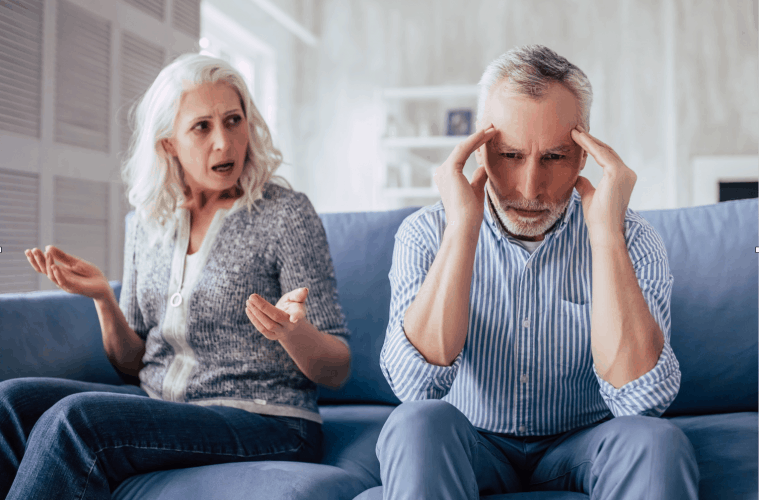 Managing Conflict as an Older Couple

The kids are gone. The hair is grayer. And you are still together. But how healthy is your relationship as a married couple who is getting closer and closer to the third or fourth decade of marriage?

And maybe it’s not so much a secret.

It’s refreshing to know that couples, regardless of how long they’ve been married, seek to work continually on their relationship when needed. Former President Barack Obama and Michelle Obama is one example of a couple being open and candid about the importance of getting help when needed.

So where does a couple start, even after 20+ years of marriage?

One of the presentations I frequently see when a couple comes for therapy is two people at odds stating they want to communicate better. Both typically feel stressed, upset, angry, and perhaps frightened that they seem to find themselves in conflict more often than not. Under that agenda is often an apparent but unspoken goal, which is that each partner wants the other to see things how they are seeing them, and once their partner sees they are right, then somehow everything will be better.

This cartoon illustrates how couples often deal with conflict. 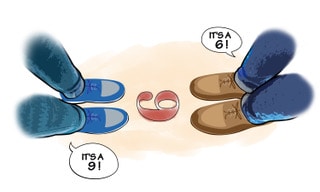 “How on earth are you not seeing this the way I am?”

That is the typical reaction when confronted with an issue such as the “6 or 9” question above. Couples feel that presenting a good argument about why they see and feel something the way they do is the answer to solving their conflict; however, they can quickly admit that this approach has never worked for them. Michelle Obama admits to going to couples counseling with the idea of the therapist “telling Barack about himself.”

So what makes this so difficult for couples to do?

Most of us are not used to practicing communication in this way.

Viewing an issue from your partner’s perspective, rather than arguing your case like an attorney, often feels like you are giving in, relinquishing power, losing. Problem-solving in a partnership and marriage is not about winning or losing, it’s about how to become an alliance when addressing conflict. If both partners can learn that swapping perspectives is not a sign of defeat but simply an attempt to understand, and an attempt to practice partnering, there is a better chance for a win/win scenario.

You have much more control over looking at someone else’s perspective rather than getting someone to look at yours.

If both people in a partnership strive for this, then both have the opportunity to feel heard and understood, even if not necessarily agreed with. So the next time you’re in a disagreement with your partner, change your question to, “How are you seeing this the way that you do?” Become an investigator of sorts; learn all the information you can about why your partner feels so strongly about a point. What fuels this fire for them? What other feelings do they have regarding the issue besides the initial anger, indignance, or frustration? Challenge yourself to become curious rather than migrating back to your own position. Try to avoid giving an opinion or jumping to a solution. Spend more time learning about each others’ thoughts and feelings. This way of communicating takes great endurance and loads of practice. Challenge yourselves to better communication.

It is so important to create space and time to practice hearing and understanding one another no matter what the topic might be. Despite the fact that one of the most common goals I hear from couples starting therapy is to communicate better, I have found that one of the most difficult assignments for couples in therapy is to prioritize time for connecting through talking. At the beginning of the therapy process, I always give the assignment of making talking time. Tending to children, busyness, work and personal schedules, house projects, extended family obligations, tiredness, and various other reasons are frequently cited by couples as obstacles to prioritizing time to talk. It seems almost impossible for couples to find time to connect and sort through feelings, issues, concerns, accomplishments, plans, goals and problems. Most default to addressing issues when they ignite and can no longer be ignored, and then the arguments and sides get presented.

What if we think of a relationship like a garden, where we have a goal to grow and sustain a healthy crop?

We set aside space, prepare the ground, add fertilizer, and plant seeds. With proper nurturing and attention, the garden will provide a healthy and colorful bounty. However, if we are consistently too busy to water the plants, forget to weed, or didn’t think to make sure there is enough sunlight, our bounty will shrivel and eventually die. This is also true of our partnerships.

How much time do you spend on arguments, or on being angry and frustrated with each other?

I believe the time couples spend stuck in conflict is far more than the time it would take to schedule and engage in a regular talking time with your partner.

I often ask couples to start by setting aside 30 minutes at the same time each week. This time should not be while driving in the car, not during meals, and not when distracted by other things such as phones, computers, or televisions. These 30 minutes should be devoted to sitting in a quiet space and talking with each other, with the same commitment to the “appointment” as one brings to a therapy session. In the beginning, it can be helpful to structure the talking time, with each partner spending 2-3 minutes sharing thoughts, feelings, questions and ideas, or just free-associating while the other listens. Listening is not just about hearing what your partner is saying, it’s about understanding what your partner is saying, even if you disagree. This talking time, practiced consistently, can then grow into using other therapy tools and strategies for sharing and problem-solving.

Couples often tell me this process feels awkward at first since many are not accustomed to being focused on each other in this intimate way. Just like going to the gym and working new muscles, this exercise in connecting can feel unnatural and takes practice and consistency to grow. Once this talking time begins to yield productive problem-solving, couples often report that life seems less overwhelming because they feel the support of their partnership.

When couples reach the goal of making time to talk, they are growing a “relationship garden” that produces a sustaining bounty.

When we search for facts and not faults, when we are brave enough to put down our defensiveness and strive to understand, we have the opportunity to not only learn about one another’s thoughts and feelings, but also to find common ground, gain intimacy, experience empathy, and build a path forward.

Christa Marvenko-Athas is a Licensed Clinical Social Worker and specializes in premarital, marriage, and couples therapy in her private practice in Towson, Maryland. She also works with divorced couples on issues of co-parenting and with couples who are remarrying and blending families.