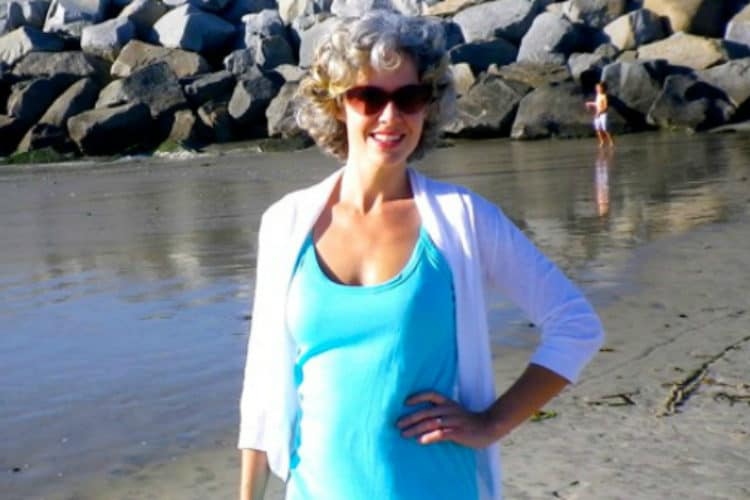 How to Grow Out Gray Hair with Confidence: Sara’s Story

Whether you are going gray, platinum blond, or salt and pepper, the growing out process can be challenging. Sara’s story might make your journey easier.

When I was 22 years old, my hair turned from its original black color to about 75 percent silver almost overnight. This drastic change happened in response to a very traumatic time in my life, and I remember feeling absolutely horrified as I peered at my roots in the mirror and saw the silver color I associated much more with my mother than myself. My mom had also gone gray early, and often had an unhappy relationship with her hair, lacking the money to color it regularly and feeling ashamed of her silver locks. Sometimes she simply wouldn’t raise her head in public, despite the objective fact that she was/is quite beautiful inside and out.

Determined not to suffer a similar fate, I began coloring my hair every two to three weeks.

My hair grows extremely fast, and in order to keep up with the roots, I spent a great deal of time feeling ashamed, covering my head with hats and headbands to conceal either the ring of black dye left on my skin after coloring or the annoying gray that became visible almost as soon as I could “get rid” of it. And so it continued for about 15 years, through college, graduate school, my professional life, marriage, and two children. This “secret” I was always trying to keep was so much a part of my everyday existence that the negative emotions I associated with it became almost subliminal. There were times that I turned down invitations from friends because my roots were showing or, like my mother, could not raise my head or look others squarely in the eye because I was ashamed of my gray.

As I entered my 30s, I started to look around and notice that many, many others were harboring the same “secret.”

It was no longer the case that I represented the anomaly of a very young woman with gray hair. As I got older, I grew into the norm. At that point, it suddenly occurred to me how strange it is that so many of us feel that we must color our hair to feel beautiful or accepted by society. It is one thing to choose to color, but it is another to feel less than okay for choosing not to. I was starting to ask the question: what is so wrong with my gray that I must continuously cover it? The layers of shame and unprocessed emotion associated with my hair began to surface, and as I “unpacked” these layers, I was delighted to arrive at the following revelation: There was nothing at all “wrong” with me or my hair!

I started to see my shiny silver roots as pretty, not ugly or shameful at all.

The next trick, though, was to figure out how I was going to get through the transition. I approached several hairdressers with the idea of growing out my gray hair, and to my surprise, they tried to dissuade me, and a couple of them flat-out refused to help. After my second child’s birth (when I was 36), the abstract notion of growing out my gray roots soon enough became a reality, as I was so busy caring for my toddler and newborn that visiting the hairdresser was simply not an option. And coloring my hair myself was about the last thing on planet Earth I cared about as I fell into bed thoroughly worn out each night.

I realized that this was my chance to go for it.

I was already well into the “awkward” stage, and there was no point, not to mention no time, to color it again. Most importantly, I wanted to be a champion of other women and to validate their authentic beauty by confidently representing my own, and that desire to empower others drove my decision more than anything.

How to grow out gray hair

My transition was not without its challenges. The first few months, in particular, were difficult as my hair was about as two-toned as it gets. At this time, I returned to my favorite hairdresser who is also a dear friend, even though it meant traveling farther from my home. She was very emotionally supportive and helped my transition enormously by removing much of my former black color and giving me great shorter cuts to speed the process.

Throughout the process, I chose to simply be okay with every stage, to place my focus on my beautiful family and the many blessings in my life, to surround myself with loving people, and to keep breathing. Perhaps most importantly, I chose to look in the mirror and say to myself, “You are beautiful,” even when society’s interpretation of my reflection was likely to the contrary.

The outcome of my year-long transition is a deep, true self-love and sense of confidence that I had never experienced before.

I stopped looking at myself and all my “flaws” with harsh judgment–which I wasn’t even fully consciously aware of doing in the first place–and instead began to look at myself with a softer, more accepting gaze. This new self-acceptance applied not only to my hair but also to the total of myself. I realized that holding myself to the standard of society’s version of “beauty” (or the way I interpreted that standard) had been holding me back from developing and stepping out with other parts of myself –my intellect, my compassion, my wisdom.

“Freeing” my gray hair was an important key to freeing myself–and it’s a decision I’m so, so grateful to have made. I hope my story will also inspire other women to see and embrace their unique, one-of-a-kind beauty–for beauty truly does come from within.