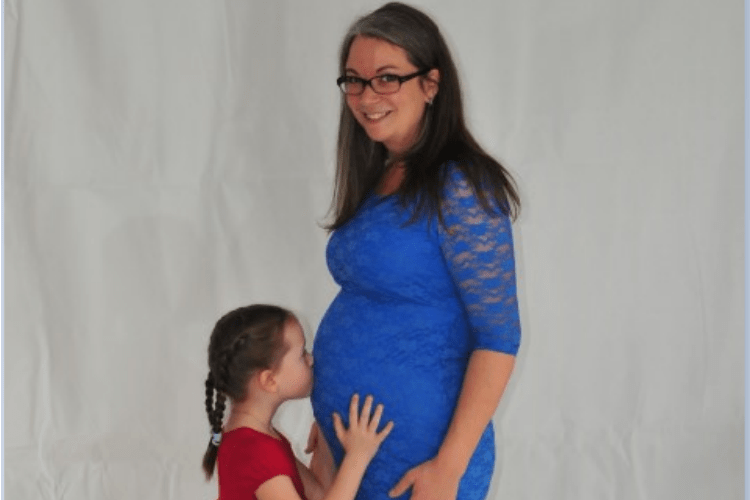 Greetings from Munich, Germany! My name is Verena, I am 41, I have been openly gray (pun intended) since I turned 35, and I am 35 weeks pregnant today.

I noticed my first silver linings when I was in my early 20s but had started to chemically treat my hair at the age of 13.

I stopped using chemical hair dye when I got pregnant with my daughter in 2007 because I thought it might harm her. During pregnancy, natural hair dye such as Henna, Amla, and Indigo were fine–I had time and found a product that covered the gray, but it needed to sit on my head for four hours! When the little one was there, finding the time to spend half a day on my hair was getting more and more difficult, and for my hair to look good, I needed to color it every three weeks.

So when my daughter was almost one in 2009, I decided to finally stop coloring my hair.

I had tried several times before to grow it out with the skunk method but always returned to dyeing. So I decided to go for the clear-cut and had my hair cut from mid-back length to very, very short. I never regretted losing the dark brown color, but losing my long hair was hard!

Being around 40 with a rather small child (my daughter is six now) can be an adventure at times–people on the bus guessing openly whether I am the mom or the granny of that girl for example. But I am used to that now, as it has been going on for almost six years. Sometimes I want to walk up to people–mostly other women–and talk to them, but I never do. I just don’t care enough about what they think.

Being pregnant at 41 is an adventure in itself.

All sorts of people asking me how I cope and they seem really surprised to hear that I am doing great–no problems whatsoever. I worked until six weeks before my due date, which is the normal thing to do in Germany unless there is a physical reason to stay at home earlier. My gynecologist, my boss, my colleagues and friends seemed to be impressed by that fact when for me it is normal, because I feel really good and much fitter than during my first pregnancy when I was about 40 lbs heavier and much less fit but with dark brown hair 🙂

Being visibly pregnant now with gray hair is another experience altogether!

My daughter said the other day: “Mami, why was this woman looking at me that way?” and I said, “Darling, I think she was not looking at you, but at me…” My mother came to visit last week and noticed the same thing but could not put her finger on what or who people are looking at. Again, I said that people are apparently looking at me, guessing whether I am just fat or could be pregnant. Even though I would have to have a VERY strange accumulation of fat just around my midriff and nowhere else…

People are not just looking, but staring openly. First at the bump, then up at the hair, then back at the bump.

My coat is getting a bit tight, and when it’s warm enough I leave it open, so there is no way to hide that bump now–not that I see any reason to hide it. It’s fun to see people’s reactions!

I hope I will be as relaxed as a new mom as I am about being a gray-haired pregnant woman around 40. And I am kind of looking forward to the reactions of strangers to the gray-haired new mom, too!

Do you have an interesting story about going gray or silver? Send us your story along with pictures to contact at revolutiongray dot com and we might feature you on our site!