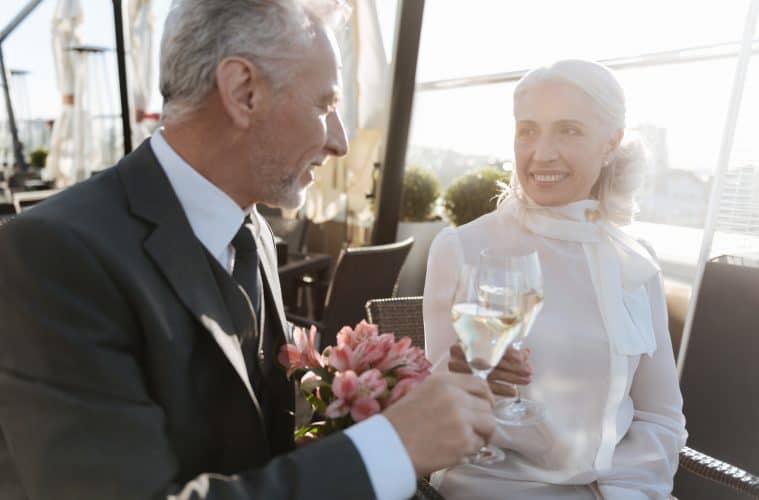 Finding Love in Your 50s

Finding love in your fifties can be tough, but it doesn’t have to be.

My mother, a woman who went through two nasty divorces with lengthy custody battles for her two children, has finally settled down with a wonderful and successful man.

The road to get there was not paved in gold like so many of us wish it to be, but she found the rainbow at the end. People get divorced later in life for several reasons: they only stayed together for the kids, they’ve grown apart, infidelity, etc. Some just want to go out and look for the happiness that was promised to us when we were young.

With the help of modern technology with sites like Match or Shagle, women can be more selective than ever before. No more of the blind dates that you had to suffer through when you were younger or combing through the men that hang out at your local taverns. This technology sets you free from the confines of your hometown and helps to find the man of your dreams.

Finding your knight in shining armor can be a chore.

You don’t have to settle for the first fling that you fancy. One of the great things about dating later in life is you have established what you want from a partner, and you know what your goals are and how to reach them. Don’t be afraid to hold out for someone that matches with you on all levels of the dating spectrum. As the saying goes, there are plenty of fish in the sea, and these dating sites prove there are many respectful, successful partners that are looking for love later in life.

My mother was close to giving up on finding someone to spend her life with. She had grown tired of the men from her hometown. She even tried to rekindle relationships with men she had known before her first marriage. Ultimately, she was living in the past rather than looking toward the future. This is a common mistake for people reentering the dating world. After trying out Match.com, she started going on more rewarding dates, meeting men more comfortable in their own skin, men that have had successful careers and raised children, men that she could connect with on many levels. Sometimes these dates would lead to another, sometimes they would go nowhere, but she was determined to find someone to spend her life with. Already knowing that she wanted someone she and her kids could connect with, she stood her ground and kept looking for a serious suitor.

She started a quiet relationship with a man named Daniel who was highly regarded in his field and very respected in the city he lived in. They kept things simple at first, going to dinner on the weekends and spending time at each other’s homes. They had a long-distance relationship an hour apart from each other, my mother in downtown Chicago and him living in the suburbs. Still, they did all they could to make it work, feeling a strong connection and attraction toward each other from the very start. Time passed and they learned to love each other. They learned that this life wasn’t complete hustling to and from the city of Chicago, so my mother made the move to live with him after two years together. My younger brother, who was just attending his first year of college and who was still upset about his parents’ divorce, followed her to his suburban home, where he stayed for the summers.

My brother, very standoffish of Daniel at first, found comfort in having a place to do his laundry and veg out on weekends when nothing special was going on at school. Dan, as I call him, made every effort to give my brother a safe space and encourage him to feel at home. Today, they are great friends, and he can see Dan as a second father. My mother was happy that she and her son could find a connection with this man. This is what she had been waiting to find all her life.

Dan took my mother to all his work events, everything from casual dinners with co-workers to charity auctions to help fund a children’s ward at the hospital he worked at. This gave my mother a new sense of pride she had never been able to find with any of the other men in her life, a sense of purpose where she felt like she was helping to better the world.

After five years of dating, Daniel gathered his and our family for Christmas, and we had a wonderful time giving gifts, having drinks, and exchanging stories of what had happened in the last year of separation due to the pandemic.

Daniel shared the story of how he’d met my mother and how his life was forever changed. My mother looked off with a smile, and we could all see she had finally found love. Daniel dropped to one knee and asked her to marry him.

Some of us were surprised, and some said it was long overdue, but we all knew my mother’s life had found a sense of completion on that wonderful Christmas day.

Finding love in your fifties can come true—sometimes you just have to search for it.

Shelby Wood is a dog mom and lazy cyclist. For fun she cooks, sings and crafts with her best friends. She believes writing is an expression of the soul and is forever an optimist